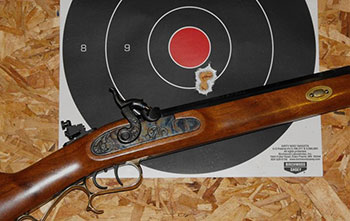 Hey!.....Ya done good, George!
Got to try out my first bottle of Mr. Flintlocks today.I won't bore you with the long list of patch lubes I've tried, but I think my days of trying new ones are over. ( I never tried the Lehigh Valley) Also very impressed with the bore cleaner feature. Really cuts down on "ramrod time"
You got a winner, 'Ol Coon....kep it up.
David Ratliff, Okieville
Hi George:
We just spoke for 10 minutes or so by phone...
I'm the guy from Hollis who just tried your patch lube in my T/C Hawken, and attached is a picture of the group I shot yesterday with it.  OK, I'll admit that it was only shot at 25 yards...
But this was for 3-shots, loaded from a pouch (no bench or table), shot offhand, after being at the outside range for over an hour already messing around with an old Euroarms "flinchlock" (but that's a story for another day).  The range conditions were a balmy 17 degrees F, with a gusty 20 to 25 mph wind.  So yes, it was really c-c-c-cold by the time I shot those for group...  But I figured if I could load and shoot well in those conditions, then it would help prepare me for the upcoming Primitive Biathlon in Dalton NH.  The load was a 0.495" ball with a 0.015" patch, over 90 gr of 777 3F powder, and lubed with "Mr. Flintlock's" patch lube -- which is a great product.
Thanks for taking my call and for making an awesome product.  I can't wait to see what that load will do at 50 or 100 yards -- when it is warmer out!
Tight groups!
Darryl H, Hollis Ctr

George,
You asked me for feedback on your lube when I bought that case from you a few weeks ago.  Well, everyone that has used it is very impressed.  The things that we have all found are:

I hope you have great success with this lube because it’s a terrific product.  I’ll be ordering another case for match prizes in the near future.  Thanks.